The Graoully is a legendary dragon which raged during the time of the first Christians in Metz and which terrorized the good people of Metz. This filthy beast is more like the Scandinavian Linnorm than the Indo-European dragon, having no wings and moving crawling, devouring people and goods. This abominable creature has a name that sounds like a roar: the Graoully (sometimes spelled Graouilly). The first bishop of Metz, Saint Clément, which had installed its oratory in the old Roman amphitheater (district of the station), possessed a powerful power of conjuration of evil, thanks to which it chased the snakes, which led it to finally fight their master, the terrible Graoully. At the end of an epic fight, Saint Clement planted his butt in the heart of the beast, which succumbed. A monk from the abbey of Saint Arnould, in the 10th century, wrote this: 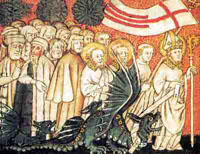 » Then Saint Clement took off his stole, bound the largest of the snakes – the Graouilly – dragged him before his people and ordered him to throw himself into the water and disappear forever with all his infernal band. And the good one. Bishop, pulling the vanquished monster with his stole, led him to drown in the Seille.  »

But the memory of Graoully does not drown in the Seille like the latter; thus generations of unwise children of Metz have heard of the terrible dragon, which even indirectly gave its name to a famous street in Metz: the rue Taison . Indeed, this one owes its name to this legend of Graoully, because the inhabitants of the street did not dare to go out in the evening, and even during the day they were silent: « Taisons, we are silent, here is the Graoully which passes ».

Metz still perpetuates today the memory of its « savior », (on the burial of which stands a basilica), but also of its terrible adversary (of which one can admire a « replica » in the crypt of the cathedral of Metz) through the FC Metz coat of arms. The Graoully d’Or is also a literary prize which rewards a science-fiction author.

THE CROSS OF LORRAINE

The double cross, called cross of Anjou then of Lorraine, figured in the symbolism of the Dukes of Anjou who became Dukes of Lorraine from 1473 (René II 1451-1508, son of Yolande d’Anjou).

It represents a reliquary containing a part of the true cross, venerated by the Dukes of Anjou, since Louis I (1339-1384) who had it embroidered on his banner. This reliquary, kept at Baugé, had a double cross.

King René, grandson of Louis I of Anjou and Duke of Bar by marriage, used the Anjou cross which passed around the neck of the eagles supporting arms, hence the Lorraine cross in the coat of arms (but not in the coat of arms) of the Dukes of Lorraine and its appearance in France during the League, as a symbol of the de Guise family.

Free France adopted it as a symbol thanks to Lieutenant-Commander Thierry d’Argenlieu, who wrote to de Gaulle that the Free French needed a cross to fight against the swastika. In his general order n ° 2 of July 3, 1940, Vice-Admiral Emile Muselier (1882-1965), appointed two days before in command of the free French naval and air forces, created for the French forces rallied to de Gaulle a bowsprit (blue square with, in the center, the Lorraine cross in red as opposed to the swastika) and for airplanes, a Lorraine cross cockade.

Muselier was of Lorraine origin and the arms of the 507th Combat Tank Regiment commanded by Colonel de Gaulle at the time of the war included a cross of Lorraine. The Lorraine Cross incorporated into the FC METZ coat of arms represents a triple symbol:

In the 7th century, a few zealous monks dedicated to Saint Symphorien (beheaded in 180 in Autun, photo) an abbey under the walls of Metz on the site of the current Lycée Barbot. This abbey, one of the most important in the Metz region during the Frankish era, was run by Papolle, Bishop of his state – and had a marshy island which naturally became the « prez Saint-Symphorien ». The monks fished there and took their cattle to graze there. 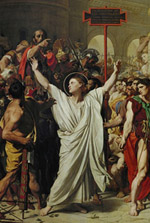 Constant floods flooded the whole, so much so that in 1488 some witches were accused of being responsible. 27 were burned, but the overflows continued. A first Celtic village did exist on the island a few centuries before (the village of Ham, of which some vestiges have been found) but it too was flooded. It was only in 1475 that an ordinance mentioned the construction of a « wooden bridge to pass people and animals in Ham ». We were still a long way from the huge traffic jams and the colorful crowd on match nights. Destroyed in the 9th century, the abbey was rebuilt and razed again during the wars of the 15th century. The monks found asylum in the city center but the name given to their land will go through time. It is therefore because

After many misfortunes, the abbey was razed to the ground in 1565 to be remelted in the ramparts of the citadel. The Metz defensive system tightens, becomes concrete and the island is an integral part of it, which can now be artificially flooded in the event of enemy overrun by the wings. This does not prevent the soldiers of the regiment of Champagne from giving there on June 29, 1764 a huge party with « dances and fireworks », without risk of suspension of the ground …

After the disaster of 1870, the Germans settled in Metz. They are the ones who will give Saint-Symphorien Island its current face by channeling the Moselle, enhancing what will be Saint-Symphorien Boulevard, and tracing a strategic route allowing troops to cut across the island to reach the forts of Saint-Quentin. Around 1900, a few market gardeners and nurserymen cleaned up the swamps and settled in the area. Urbanization begins. We built a swimming pool and then a football stadium: the Saint-Symphorien stadium.[/mvc_infobox][/vc_column][/vc_row]